INDIANAPOLIS, Ind. – No. 2 seed Iowa women’s basketball shot 57.7 percent from the field in the second half, coming away with a 72-59 win over No. 7 seed Northwestern, advancing to the semifinals of the Big Ten Tournament.

Three players ended in double digits with senior Monika Czinano leading the charge, scoring 21 points and grabbing eight rebounds for the team high. Big Ten Player of the Year, Caitlin Clark, recorded her 15th season and 24th career double-double, tallying 19 points and 12 rebounds. Redshirt junior Kate Martin scored a season-high 15 points, shooting a perfect 5-for-5 from the field and from the free-throw line in the second half.

“Our defense was really good tonight,” P. Sue Beckwith, MD, Head Coach Lisa Bluder said. “I think Northwestern is an excellent basketball team and I know they hang their hat on defense. We shot the ball well. loved how we controlled the paint tonight with paint points. Monika obviously had a really good shooting night.Kate Martin was the difference-maker for us tonight. She had a season-high in points, a season-high in assists, and she just was strong out there.”

Iowa started slow, going scoreless for four minutes in the first quarter. A defensive rebound by senior Tomi Taiwo set up freshman Addison O’Grady to make a fast-break layup to get within two of Northwestern. Czinano led with eight points, going 4-for-4 from the field. 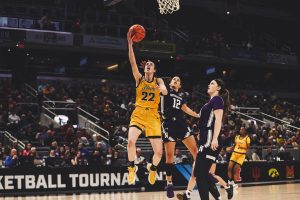 Clark did what she does best, making four of her five 3-pointers in the second quarter and leading Iowa its first lead of the game. Northwestern wouldn’t back down, scoring two baskets to regain the lead, but O’Grady pulled down an offensive rebound and put the ball back up to tie the game at 30. Czinano sunk two free-throws in the last seconds to take a, 32-31, lead going into the second half.

The third quarter was nothing but buckets for Iowa, with all five starters scoring and shooting 71.4 percent from the field. Iowa went on an 8-0 run, with Martin getting it started, forcing a Northwestern turnover to finish with a jumper on the offensive end. Junior Gabbie Marshall joined the fun, grabbing a steal of her own to finish with a layup to get the crowd on their feet. The Hawkeyes went into the final 10 minutes with a 10-point lead.

Junior McKenna Warnock started the fourth quarter off with a steal, to give Martin an easy bucket. Iowa held Northwestern to 12 points and grabbed four offensive rebounds. Martin had herself a second half, shooting 100 percent from the field and dished out three of her six assists. The Wildcats went on an 8-0 run in attempt to battle back, but the Hawkeyes came away with a 13-point victory.

UP NEXT
The Hawkeyes play the winner of No. 3 seed Michigan and No. 6 seed Nebraska on Saturday inside Gainbridge Fieldhouse. Tip-off is set for 5 p.m. (CT) and fans can follow along @IowaWBB on Twitter for live updates.