Brian Ferentz, Seth Wallace both address accusations made against them

Before talking about his expectations for the Iowa offense, Brian Ferentz addressed the accusations of racial disparities in the Iowa program that were made by multiple former black players during the summer.

Most of the accusations were made against Chris Doyle, who has since lost his job as the Iowa strength and conditioning coach as part of the fallout.

But Brian Ferentz also was accused of mistreating some former black players, and the son of Iowa head coach Kirk Ferentz issued what seemed to be a heartfelt apology in his first interaction with the media since the accusations were made public in early June.

“Our goal is very simple; it’s for every player that comes to our program to have academic success, to graduate with a degree from the University of Iowa, to have personal success and to grow and mature as a human being,” said Brian Ferentz, who is entering his fourth season as the Iowa offensive coordinator. “And then, of course, to have success on the football field as part of a successful team and having a good individual career.

Brian Ferentz addressed the media several minutes after Wallace had met with reporters during what was called Iowa’s annual media day event, although, Thursday’s event was far from typical due to the restrictions caused by the COVID-19 global pandemic.

The event was held in the north end zone of Kinnick Stadium and players were not made available.

This was all about the coaches, and for Wallace, it was a chance to address a disturbing accusation that was made against him by former Iowa defensive end Jack Kallenberger.

Kallenberger accused Wallace of posting Kallenberger’s grade-point average on a board for other players to see, and for making comments about Kallenberger’s so-called lack of intelligence.

Wallace had just finished addressing the media on Thursday without having been asked about Kallenberger’s accusations when he suddenly returned to the podium.

It almost seemed as if Wallace wanted to talk about it, and that he knew a question was about to be asked, which proved to be the case.

“I do appreciate you asking the question and appreciate the opportunity to answer the question,” said Wallace, who is Iowa’s assistant defensive coordinator and linebackers coach. “The past seven months have been challenging for all of us.

“I think both of us provided a perspective on both ends,” Wallace said of his conversation with Jack Kallenberger. “I think it was extremely positive. 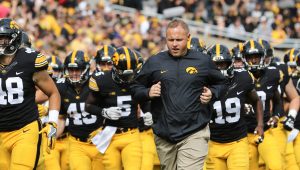 Wallace deserves credit for addressing the issue. It’s uncertain what made him return to podium. But it was clear that he wanted to have a dialogue.

He didn’t make any excuses or try to dismiss what allegedly had occurred.

And though Wallace didn’t go as far as to apologize, he seemed sincere and contrite.

Wallace was asked if he feel he has to change his approach with his players.

As for Brian Ferentz, he said he doesn’t recall saying any racially insensitive comments. But he also didn’t accuse any of the players of not being truthful.

Brian Ferentz is usually very outspoken and can be brash and arrogant at times. But his demeanor was different on Thursday.

He seemed more humble and sympathetic, and he even shared a story about a conversation he had with a former Iowa player who told Brian that he can be abrasive and flippant at times.

“I appreciate his honesty and candor,” Brian said of the former player, whose identity wasn’t revealed. He said, ‘coach, sometimes, you’re just abrasive and your comments could be flippant.’ And I didn’t know how to take that, not all the time.

“In my experience, and I know it sounds cliché, but the basis of any relationship is going to have to be empathy. So when I hear something like that, it’s disappointing. I’m disappointed in myself that I couldn’t be more empathetic, that I couldn’t understand how I was being perceived by that player. Not so much what did I say? It’s more about asking the question, what did you hear?

Thursday was a step in the right direction for both Brian Ferentz and Seth Wallace, and for the embattled Iowa program, which will face Purdue in the much-anticipated season opener on Oct. 24 in West Lafayette, Ind.

The past several months have been a public relations disaster, and an embarrassment for Kirk Ferentz.

Brian Ferentz and Wallace both said all the right things on Thursday, and there does seem to be a positive vibe within the program in the wake of the allegations.

Kirk Ferentz has admitted to having a blind spot where Chris Doyle was concerned, and the current players also have spoken highly of interim strength coach Raimond Braithwaite, who is in his 16th season at Iowa.

Braithwaite also met with the media on Thursday and he said he never heard Doyle say anything racially insensitive to any player.

But Braithwaite also didn’t try to dismiss or minimize the accusations. He is in difficult position after having worked under Doyle for 15 years and then replacing him under troubling circumstances.

Kirk Ferentz was the final member of the coaching staff to address the media on Thursday, and near the end of his interview, he was told about what Brian Ferentz had said earlier and then asked to comment about learning from the experience.

“I think most staffs are committed to doing the right things, and one thing about life, we all learn and we all grow, hopefully,” Kirk Ferentz said. “And if you’re not, you’re really not living in my mind. And you’re not going to survive or do well in life is my personal opinion.”

Time and results will ultimately determine if Brian Ferentz and Seth Wallace have learned from this sobering experience.

But the emotion they both displayed on Thursday, and the words they both expressed, was at least a step in the right direction.

Northwestern a different offense with Peyton Ramsey at quarterback