Mr. Optimist vs. Mr. Pessimist look back at 2022 season with spirited debate

IOWA CITY, Iowa – Kirk Ferentz just finished his 24th season as the Iowa football coach with a 21-0 victory over Kentucky in the Music City Bowl on Saturday in Nashville, Tennessee.

The game played out much like the season as the Iowa defense and special teams helped to pick up the slack for an offense that was historically bad.

The game also helped to set the stage for a season-ending debate between the two guys that can’t agree on anything related to Hawkeye football, and Hawkeye athletics in general.

Here is the transcript from their latest debate:

Mr. Optimist: Sophomore defensive back Cooper DeJean set a program record by returning three interceptions for touchdowns this season, including one in the Music City Bowl on Saturday.

Mr. Pessimist: DeJean had more pick sixes this season than any Hawkeye wide receiver had touchdown catches, which was one each by Nico Ragaini and Arland Bruce, who is now in the transfer portal.

Mr. Optimist: Iowa finished the 2022 season with an 8-5 record and has won at least eight games in 14 of Kirk Ferentz’s 24 seasons as head coach. 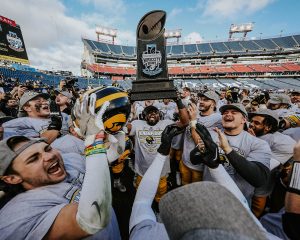 Mr. Pessimist: The iconic television series “Leave It to Beaver” was in its second season when Iowa last won the Rose Bowl in 1959.

Mr. Optimist: Tory Taylor averaged 48.3 yards per punt in the Music City Bowl, and six of his punts were downed inside the 20-yard line.

Mr. Optimist: The Iowa football team has a 51-23 record since Brian Ferentz was promoted to offensive coordinator before the start of the 2017 season.

Mr. Pessimist: That’s sort of like saying the Chicago Bulls won four NBA titles after Will Perdue joined the team in 1988.

Mr. Optimist: Cade McNamara led Michigan to the 2021 Big Ten title, and to the college playoff that season as its starting quarterback, so for him to transfer to Iowa is a major step forward.

Mr. Pessimist: Cade McNamara played behind arguably the best offensive line in the country at Michigan, and he had three dynamic running backs to help carry the load. That will hardly be the case at Iowa.

Mr. Optimist: The Iowa Swarm Collective has seen its membership more than triple to over 1,100 members since Cade McNamara committed to Iowa on Dec. 1.

Mr. Pessimist: The Iowa Swarm Collective is helping to raise NIL money for an athletic department that acts as if name, image and likeness will eventually cease to exist and that order will be restored again.

Mr. Optimist: It was pretty cool seeing a fan with his dog in the stands at Kinnick Stadium in the closing minutes of Iowa’s 27-0 victory over Nevada in the third game of the season, which lasted nearly six hours due to three lightning delays.

Mr. Pessimist: It would’ve been even more cool to have seen another quarterback besides Spencer Petras play in the game for Iowa.

Mr. Optimist: Iowa only allowed 18 touchdowns in 13 games this season.

Mr. Pessimist: Iowa only scored 25 touchdowns in 13 games this season, and the defense scored seven of Iowa’s touchdowns.

Mr. Optimist: Kirk Ferentz said he will conduct a comprehensive study after the season in an attempt to make Iowa more productive on offense.

Mr. Pessimist: The last time Kirk Ferentz conducted a comprehensive study was after the 2014 season, and while that led to a change at quarterback, and to a change in practice time, the offense stayed pretty much the same, conservative, predictable and rooted in a play-not-to-lose mentality.